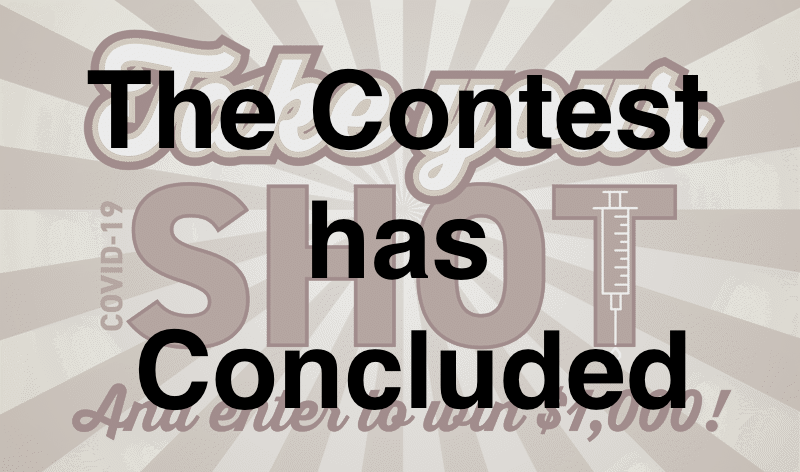 Our Vaccination Incentive Program (VIP) is over. As we verify the remaining winners and award them their $1000 prize, they will be announced here. 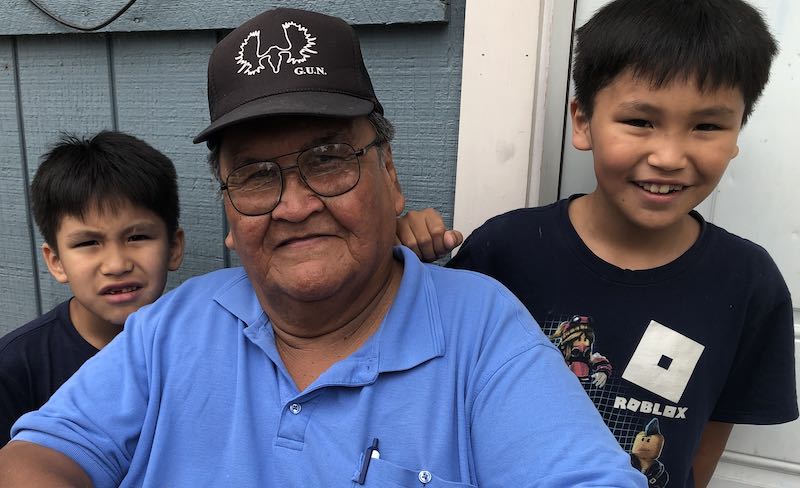 "[Vaccination] was a good thing to do for my family."

The week one winner is Paul Tritt, Jr. Originally from Venetie, Paul was very happy to find out he had been selected as this week's recipient of $1,000, submitting a photo of his vaccination record with other members of the family as well. He said he would encourage others who haven't received their shot. He understands some are fearful of needles or don't know as much as they would like about the vaccine, but that it was a good thing to do for your family. Paul says the money will be used for some practical things for his grandsons and to get some heating fuel oil.

"I’m glad to be safe. I’m also glad I can protect the rest of my family."

Tucker Forbes (center) is the recipient of $1,000 in the second week of the North Star Community Foundation’s Vaccination Incentive Program. He turned twelve two months ago and waited until his school activities ended before recently receiving his two shots. “I’m glad to be safe,” Tucker replied when asked about getting jabbed with a needle. “I’m also glad I can protect the rest of my family.” He’s now looking forwarding to going back to school and being with his friends in class. 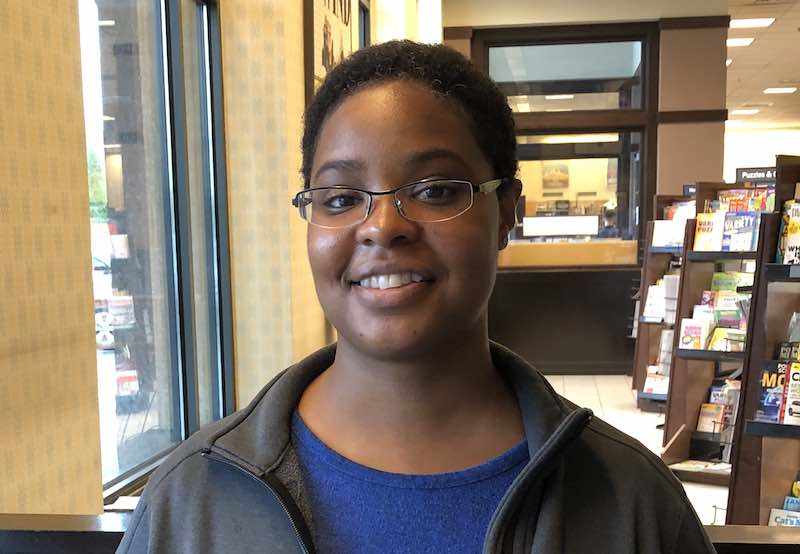 "It is a selfless act in keeping others safe."

Latoya Wilson is the recipient of $1,000 in the third week of the North Star Community Foundation’s Vaccination Incentive Program.

After her boss saw the VIP notice, staff passed around the information on how to help the communities. “It is a selfless act in keeping others safe,” said Latoya. Initially, her family was hesitant to be vaccinated, so she stepped up to be the first.

“They saw that I was okay. The asked questions on how it felt.” Her positive attitude convinced them that they, too, could be protected. Latoya was very happy to be at the forefront of her family. “I have no regrets, keeping family safe.”

Latoya offered one possible use for her award. “I’m thinking about a new refrigerator.” 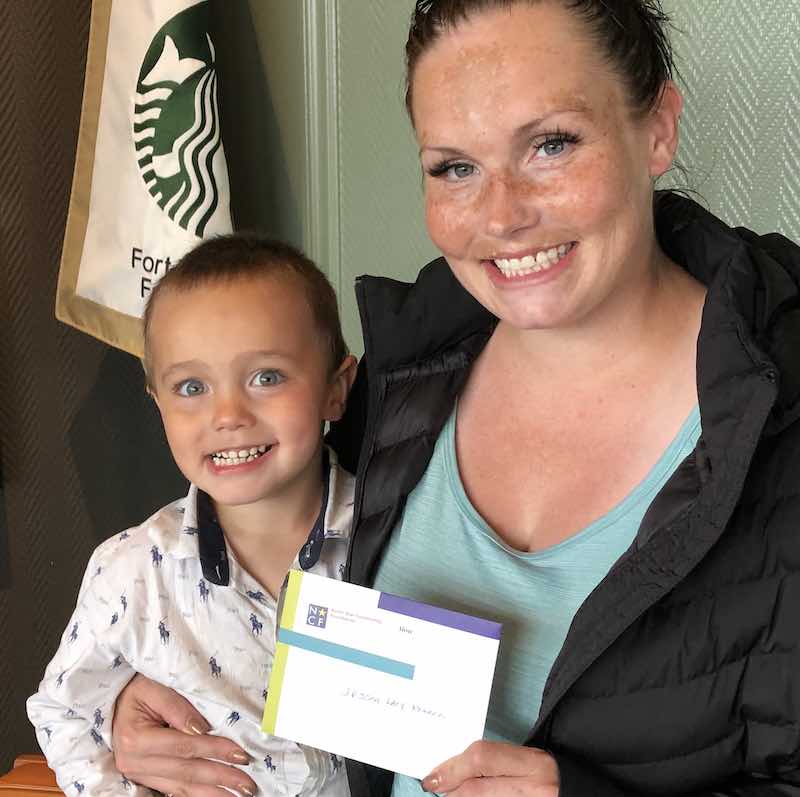 "Lloyd and I decided it was time. We want to be healthy for our kids."

Jessica Lacy-Romero is the recipient of $1,000 in the fourth week of the North Star Community Foundation’s Vaccination Incentive Program.

First learning of the incentive program on the news a few weeks ago, Jessica and her husband Lloyd Romero had still not decided to get their shots. Then they heard of people ending up in the hospital with the Delta variant, being put on ventilators, asking nurses if they could receive the vaccine. “But it was too late for those who died from the virus,” she said. “Lloyd and I decided it was time. We want to be healthy for our kids.”

This is coming just as deferred bills were coming due,” Jessica said. “It couldn’t have come at a better time.” And she is spreading the word. “I just asked a friend, have you been vaccinated yet? You should. I just won a thousand dollars.” 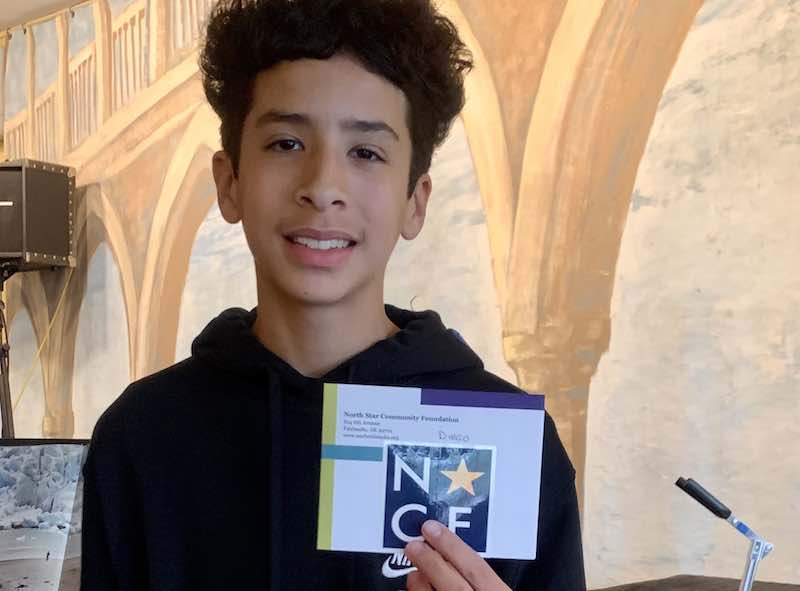 ”Getting vaccinated was a step in the right direction to a normal life.”

Diego Guevara-Mendoza is the recipient of $1,000 in the fifth week of the North Star Community Foundation’s Vaccination Incentive Program.

After listening to his parents, Diego felt he would be safer and would not be a health threat to others in school if he was vaccinated. The same day he received his shot, he submitted his entry in the North Star Community Foundation program, along with his parents.

Diego isn’t one to draw attention to himself. He doesn’t enjoy being in front of a camera. But he does believe people should help each other and work toward a common goal of bringing an end to the pandemic. Diego is entering high school this year. He doesn’t want another year canceled that would keep him from being with friends. Diego added, ”Getting vaccinated was a step in the right direction to a normal life.” 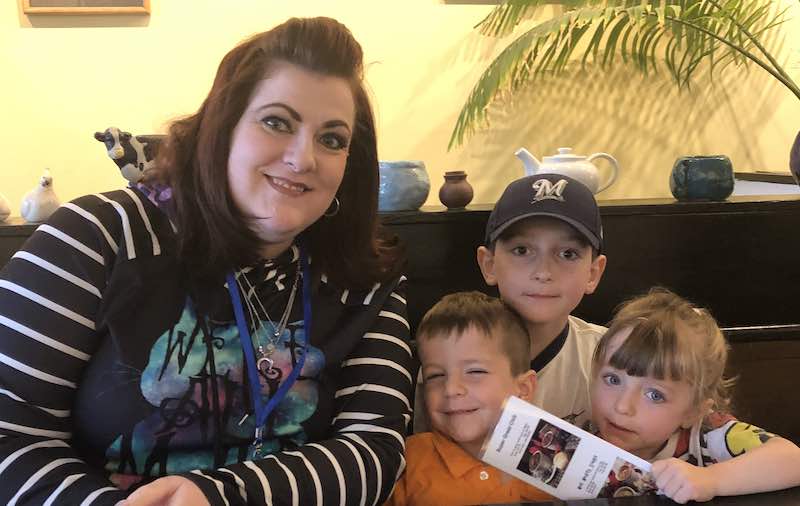 “The more people are vaccinated, the faster we get through this.”

Jennifer Whitney is the recipient of $1,000 in the sixth week of the North Star Community Foundation’s Vaccination Incentive Program.

Jennifer and her five children all contracted COVID-19 in December. “We spent three weeks couped up together riding out some fairly harsh symptoms,” she said. After that, she felt her family probably wouldn’t need the vaccine.

But then, Jennifer started noticing that many places were requiring a vaccine. Many cities had travel restrictions. She couldn’t attend concerts. There were inaccurate rumors that people wouldn’t be able to get on base without a card. At work, she was required to wear a mask, which was a challenge serving tables during the hotter days of summer.

Jennifer talked with her friends in the medical field who strongly encouraged her to also be vaccinated. They didn’t appear to have had complications. She noticed the VIP flyer announcing the incentive program on the door of a local non-profit agency.

She hesitated at the two-shot regimen. “I would have had a hard time not only scheduling but also remembering the second appointment,” Jennifer, said, choosing the one-and-done Johnson and Johnson dose. That night, she had symptoms stronger than during her bout with the actual virus. But those cleared up within 24 hours. She was relieved, then set out to get her life back to a sense of normalcy.

Jennifer encourages anyone still waiting to make the choice to protect themselves as well as the community. “The more people are vaccinated, the faster we get through this.” 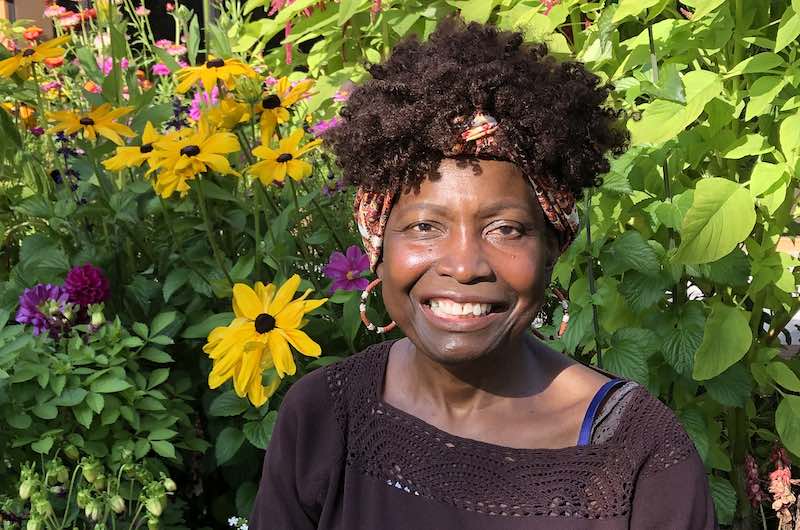 “We didn’t have this argument with polio or smallpox vaccines.”

Dorothy (Dotty) Harris is the recipient of $1,000 in the seventh week of the North Star Community Foundation’s Vaccination Incentive Program.

Dotty has truly wondered how people could not trust enough in the vaccine once there had been millions who are now more protected from the virus and avoiding hospitalization or serious illness. She noted that even those involved with the descendants of the Tuskegee Project, who had good reason to suspect health care professionals were advocating that people get protection through the vaccine.

Something that bothers Dotty more is the politicizing of science and how certain groups are scapegoating others through false information, such as the lieutenant governor of Texas saying people of color are responsible for the spread of COVID-19. She has advocated that her friends get protection, but she has had to let some of those who have refused go their own way when it comes to being together. Others have been receptive to her message and have joined her in convincing others that getting their shot is the right thing to do.

“We didn’t have this argument with polio or small pox vaccines. “ Dotty added, “It makes our community safer.” She was concerned not only for her own family but for all families and health providers as well. 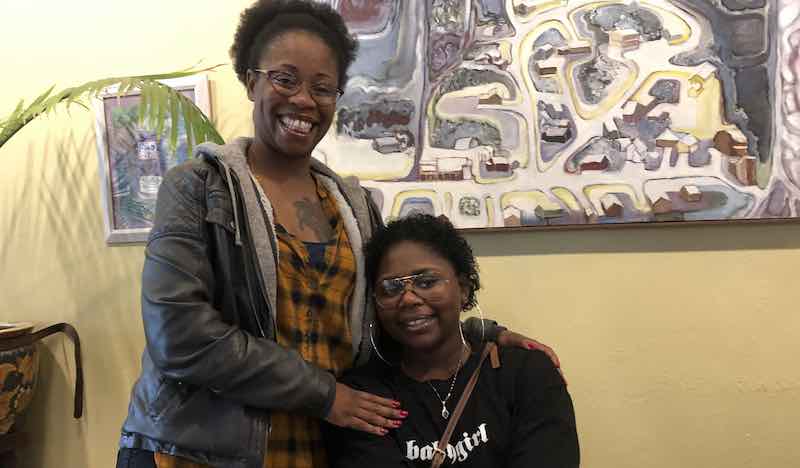 Camille McQuillar is the recipient of $1,000 in the eighth week of the North Star Community Foundation’s Vaccination Incentive Program.

Camille and her mother, Danielle McQuillar, talked about the vaccine, how they thought being protected as much as possible against what the virus could do, and decided on taking the shot. Camille is just barely a teenager and had to wait for her birthday to receive the vaccine, then submitted her entry on the day of her second shot. “I decided to do it,” she claimed. Danielle replied, “I told you you should do it.” To which Camille replied, “I did it.” Danielle looked at her in a way that confirmed Camille was her mother’s daughter. As for what she plans to do with her winnings, Camille confessed she was an online shopper. That was another point confirmed by mom. 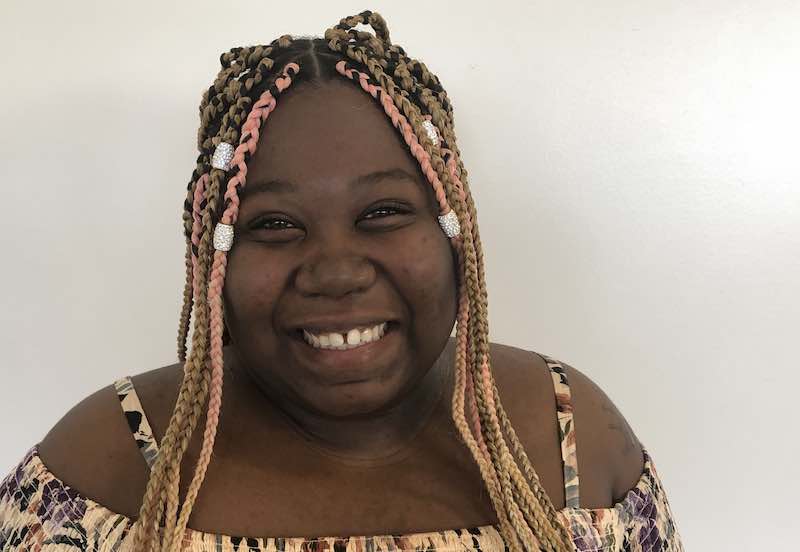 Darylle (Dee’dee) Helms is the recipient of $1,000 in the nineth week of the North Star Community Foundation’s Vaccination Incentive Program.

Dee’dee visited a friend who had been hospitalized with a severe asthma attack. As they were leaving the hospital, the nurse really stressed how young people their age were suffering severe symptoms and strongly suggested they be vaccinated. Up to that point, Dee’dee had been praying that she could dodge any illness. Just as they were to the door, the nurse again passionately requested that they get the vaccine. Dee’dee took that to heart as a divine message.

The church Dee’dee attends soon after hosted a pop-up clinic where she and friends signed up to get their first shots. Her work schedule interfered with her timing on the second dose, until there was a weekend clinic that allowed her to complete the regimen. On that same day, she thought, “I should enter the contest, maybe the next day. But God said, ‘Move!’ and I did.”

Her faith in being vaccinated spread to other friends and family members. She feels blessed in being a winner in the week she submitted her entry, encouraging others to do the same. Dee’dee reflected on how her luck could be put to good use. “Now I can consider getting those winter tires God told me to move on as well.”

“This is not fake. People need to know [the danger] is real.”

Brian Haddox is the recipient of $1,000 in the tenth and final week of the North Star Community Foundation’s Vaccination Incentive Program.

Brian has an absolutely positive outlook on life. Which is good, considering some of the adversity he’s faced since he was born. As a premature baby, he started off life with the aid of a ventilator. With weakened lungs, he is very susceptible to severe effects from colds and flu. His father, James, said that even with being home-schooled, Brian has to be careful to exposure from family members who come down with various ailments. COVID precautions were already part of the routine before the pandemic.

The one thing that Brian was concerned about was not being able to be part of family events. When the vaccine became available for teens, he was ready and willing to be first in line. There was the fear that the COVID-19 virus could severely impact his lungs, but what was more concerning for Brain was not being able to hang out with his dad.

When asked how he felt getting the first shot, Brian lit up with wide eyes in his satisfaction that he would be safer and that his family would as well. “This is not fake,” he said. “People need to know [the danger] is real.”

Brian’s plans for this windfall are still being discussed with his parents. He’s hoping for a new X-Box or Nintendo Switch at least, then the rest could be put into savings. With his enthusiasm for caring for others and taking care of his health, he is quite pleased that he and his family have chosen to be vaccinated.